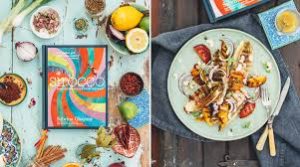 Taken from Sirocco: fabulous flavours from the East by Sabrina Ghayour
I’ve adapted it by adding quinoa flatbread and coconut yoghurt rather than dairy yoghurt.

In a small bowl, combine the tahini, coconut yoghurt, lemon zest and juice and 2 tablespoons of water together until an even sauce is formed and the tahini is fully dissolved. Season with salt.

Soak the quinoa overnight or for about eight hours in water. The best way to do this is put the quinoa in a larger bowl and cover it in water. Then leave this to one side.

Once you’re ready to make the bread, pre-heat the oven to 190C. Then drain any water left in the quinoa bowl, before putting the quinoa into a food processor with the apple cider vinegar, herbs and salt. Blend for a few minutes until a smooth dough forms, it should look a bit like pancake mix.

Line the bottom of a pizza dish or cake pan with olive oil and pour the mix in, then bake for about 15- 20 minutes, until the base is firm.

Using a hand-held blender or mini food processor, blitz the dressing ingredients until the mixture is smooth and evenly combined.

Put the kale into a large mixing bowl and pour over the dressing along with the cinnamon, Sumac and salt and pepper. Use your hands to work the dressing into the kale thoroughly, which will wilt the leaves a little. Once wilted, add the flaked almonds and sunflower seeds and combine well. Cover the bowl and refrigerate 1 hour before serving.